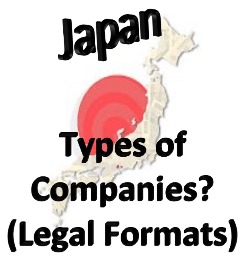 Types of Companies in Japan, Business Establishment Formats and Options!

Setting up a Company in Japan. Opening up a legal entity and business presence in Japan. Branch Office, Subsidiary Co, etc.

Japan provides a level playing ground for foreign investors. It is the home of many World Top Companies, and many multinational companies have their presence in Japan. Japan offers an attractive market and extensive business opportunities!

There are many options available for establishing a legal business entity in Japan. As a practical choice to engage in commercial business activities in Japan, the option is either to establish a “Branch Office” or a “Subsidiary Company” in the form of a Kabushiki-Kaisha or a Godo-Kaisha.

According to the Japanese Companies Act, there are four types of formats:

The formats such as Gomei-Kaisha and Goshi-Kaisha are rarely chosen in practice because equity participants' burden is unlimited rather than a limited liability. 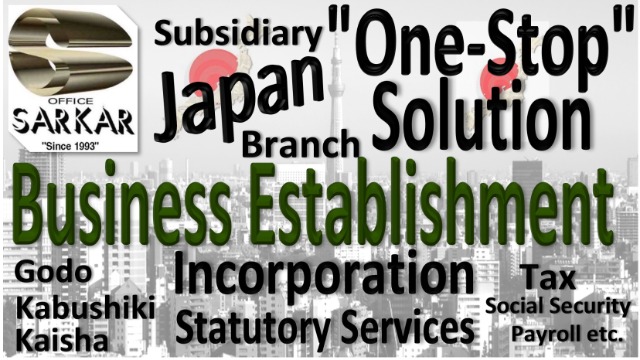 However, for commercial business activities in Japan, the most favored option is to establish a “Branch Office” or a “Subsidiary Company” in the form of a Joint-Stock Company(Kabushiki-Kaisha) or a Limited Liability Company (Godo-Kaisha).

Representative Office: Representative office is generally established for carrying out market research and liaison activities on behalf of the head office. It does not allow to conduct commercial business activities in Japan. Therefore "No Registration" is required at the Legal Affairs Bureau nor be subjected to corporate tax under Japanese tax laws, except banking, security, or similar businesses.

Joint-Stock Company (Kabushiki-Kaisha): A Kabushiki Kaisha has commonly abbreviated KK. A KK can be registered in the English alphabet, i.e., “ABC Consulting KK” (ABC Consulting 株式会社) except for the “KK” in kanji character. It can be registered with a capital of 1(one) yen and with only one Investor/Promotor as “Shareholder and Director.” In case of incorporating a KK with 2(two) or more Directors, it can choose a “Representative Director(s).” A KK is Japan's most widely known and credible type of company structure. Under the amendment in the Companies Act introduced in March-2015, only a Japan address is required for a KK registration/incorporation in Japan. Shareholders and Directors can all be non-residents, and a resident in Japan is not mandatory.

Limited Liability Company (Godo-Kaisha) (LLC): A Godo Kaisha has commonly abbreviated GK. GK is a comparatively new type of company introduced in the Companies Act of Japan” in May-2006. GK is similar to the UK’s Private Limited Company (Ltd) or the American Limited Liability Company (LLC). A GK can be registered in the English alphabet, i.e., "ABC Consulting GK" (ABC Consulting 合同会社) except for the “GK” in kanji character. Promoters/Investors in GK are called “Members” (社員, shain), and each member provides a capital/equity contribution. Members(investors) of a GK have limited liability, similar to a Kabushiki Kaisha(KK) shareholders. All Members in GK are “Representatives of the Company” by default unless Executive Manager has been appointed. The Members in GK may choose one or more Executive Managers from among their ranks. The Executive Manager can be either an Individual or a Corporation. However, in the case of “Corporate Executive Managers,” it must appoint at least one functional manager to perform the actual management duties. The legal responsibilities of GK Managers are similar to the duties of Directors of KK. A foreign entrepreneur or a corporation can register a GK in Japan without a "Local Resident in Japan" under the amendment in the Companies Act introduced in March-2015.

General Partnership Company (Gomei-Kaisha): In the Companies Act of Japan, Gomei-Kaisha, all partners(investors) are jointly and severally liable for any liability incurred by the company, similar to an unlimited partnership in other countries. Because the partner's liability is unlimited, creditors can go after each partner's personal assets if the company's assets are insufficient to meet the obligations. Thus, it is hardly chosen form of legal entity in Japan by foreign co or entrepreneurs.

Limited Partnership Company (Goshi-Kaisha): A Goshi-Kaisha is a type of "unlimited liability" incorporation under the Companies Act of Japan. Unlike the other types of company structure Godo-Kaisha and Kabushiki-Kaisha, there is no limit on liabilities on the investors. Thus, it is hardly chosen form of legal entity in Japan by foreign co or entrepreneurs.

Limited Liability Partnership [LLP] (Yugen Sekinin Jigyo Kumiai): This format is considered a Japanese version of a Limited Liability Partnership (LLP). It is not a corporation but a Partnership formed only by the equity participants, who have limited liability. Taxes are levied on profits allocated to equity participants but no tax on LLP. The format is typically used for carrying out a time-bound project. One partner must be a local "Resident of Japan."

Option regarding the formation of a legal business entity in Japan for ongoing commercial activities: The favored choice is either to establish a "Branch Office" or a local "Subsidiary Company (Kabushiki-Kaisha or Godo-Kaisha)."

A foreign company or entrepreneur can establish a Japanese company, Godo-Kaisha(GK) or Kabushiki-Kaisha(KK), in Japan without a "Local Resident in Japan" (Non-Resident Promoter/Director) under the amendment in the Companies Act introduced in March 2015.