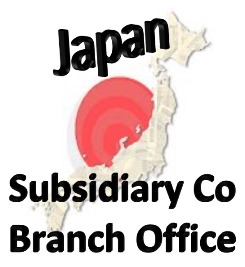 How a foreign company or entrepreneur sets up a business presence in terms of the formation of a legal entity depends upon the nature and magnitude of the business, proposed business operation, as well as legal, tax, and other considerations. Many options exist, ranging from a Branch office or a local Japanese subsidiary company such as Kabushiki-Kaisha (KK), Godo-Kaisha (GK), and there are several local types of company formations available. There is also a Japanese version of a limited liability partnership (LLP), not a corporation, but a partnership format.

However, to engage in commercial business activities in Japan, the option is either to establish a “branch office” or a “local subsidiary company” as a legal entity.

Representative Office: Representative office is generally established for carrying out market research & liaison activities on behalf of the head office. It does not allow to conduct commercial business activities in Japan. Therefore no registration is required at the legal affairs bureau nor be subjected to corporate tax under Japanese tax laws, except banking, security, or similar businesses.

Branch Office: The simplest model for a foreign company to establish a legal entity for commercial business operations in Japan is to set up a branch office. There are no essential differences between the branch office and domestic corporations regarding the range of business activities allowed. Taxed on branch office income only, and the rate is the same as a local company. For registration, there is no requirement to establish a statutory officers/management body; it only needs a local physical address (not a PO Box) and a Representative in Japan (must be a “Resident in Japan”). In general, transfer of operational funds between the branch and its head office can be made without restrictions and is not subject to withholding tax. A branch office can register a maximum of 2 (two) “Representative in Japan,” but 1 (one) must be a “Resident in Japan” and a director/member of the parent company with his / her personal overseas resident address. 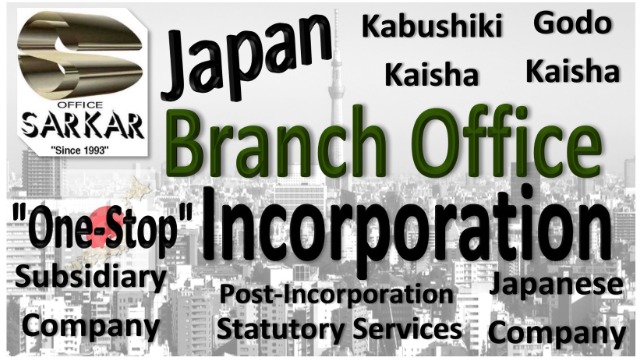 Subsidiary Company: A foreign company willing to establish a subsidiary company may choose from the followings:

A subsidiary is a separate legal entity from the foreign parent company. Therefore a foreign company will bear the liability of an equity participant stipulated by law for all debts and credits generated by the subsidiary company's activities. The minimum requirement for establishing a subsidiary co in Japan is to have a local physical address (not a PO Box) and a local “Resident in Japan.” [Please see the “Note)” below re exception for a local “Resident in Japan.”] Local Resident in Japan could be either a Japanese or a foreign national, but the person must have an appropriate residence status as per immigration law for a foreign national.

Note: "No Local Resident in Japan" is required as a mandatory requirement for registration of a "Subsidiary Company" since the amendment of the Companies Act introduced in March-2015.

A foreign company or entrepreneurs can establish a Japanese Company in the form of Godo-Kaisha(GK) or Kabushiki-Kaisha(KK)] in Japan without a "Local Resident in Japan"(Promoter/Director) under the amendment in the Companies Act introduced in March-2015.

Limited Liability Partnership (LLP): This format is also allowing to do business by using a Yugen Sekinin Jigyo Kumiai. It is considered the Japanese version of a limited liability partnership (LLP). It is not a corporation, but a partnership formed only by the equity participants, who have limited liability. Taxes are levied on profits allocated to equity participants but no tax on LLP. The format is normally used for carrying out a time-bound project. One partner must be a local “Resident in Japan.”

Option regarding the formation of a legal business entity in Japan for ongoing commercial activities:  The  favored option is either to establish a “Branch Office” or a local “Subsidiary Company (Kabushiki-Kaisha or Godo-Kaisha)."

Foreign companies can register a local Subsidiary Company(Kabushiki-Kaisha [KK] or Godo-Kaisha [GK]) in Japan without a local "Resident in Japan."