A Kabushiki Kaisha, commonly abbreviated KK, is defined under the “Companies Act of Japan.” A KK Company must include in Kanji KK ("株式会社") in its name either as a prefix (i.e., in Japanese “mae-kabu”) or suffix (i.e., in Japanese “ato-kabu”). The term KK is often referred to in English as “Joint-Stock Corporation.” However, as a company name in English, “KK” is used as "Co. Ltd.," "Corporation," and or "Incorporated." Kabushiki-Kaisha (KK Co.) enjoys the preferred status among the Japanese business community. 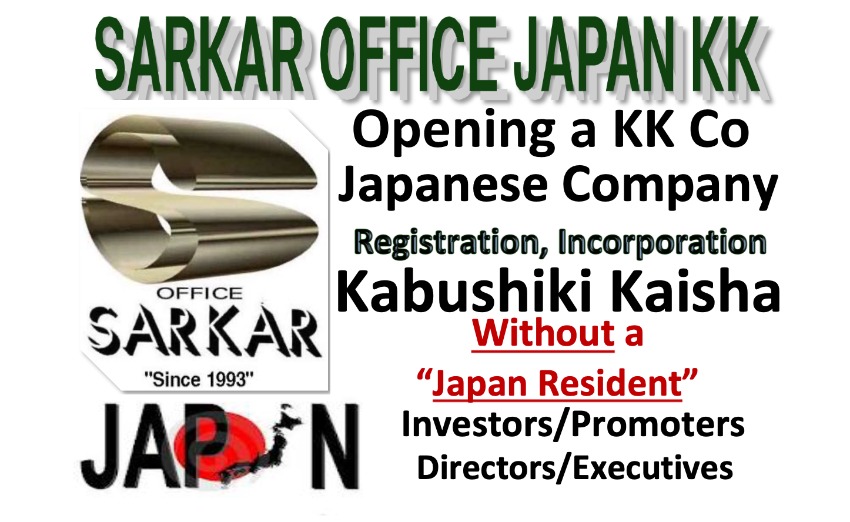 A Kabushiki-Kaisha (KK Co.) under the “Companies Act of Japan” introduced in May-2006 it can be registered with a capital of 1(one) yen, and with only one Investor/Promotor as “Shareholder and Director.” In the case of incorporating a KK with 2(two) or more Directors, it can choose a “Representative Director(s).” KK Company name can be registered in the English alphabet, i.e., “ABC Consulting KK” (ABC Consulting 株式会社) or “KK ABC Consulting”(株式会社 ABC Consulting) except for the “KK” in kanji character ("株式会社").

Note: "No Local Resident in Japan" is required to register a Kabushiki-Kaisha (KK Co.) in Japan under the Companies Act of Japan” introduced in May-2006. Only a Japan address is necessary for the KK incorporation in Japan.

The tax structure is the same for KK Co. and other legal entities in Japan, such as GK Co. On the other hand, a KK company in Japan enjoys a more prestigious status as a legal business entity.

Time-frame for registration: Depends on the structure of promoters/investors, directors(executive officers), etc. Upon applying to Legal Affairs Bureau for registration, it takes about 2(two) weeks to obtain a company registration certificate.

For further details, please refer to the registration flowchart of KK Co.